From mid-February through March 2022, drj art projects will be staging an extended
Street Screening: in addition to the 9:16 monitor on the outside window of Leberstrasse 60,
the entry space will be transformed into a film stage:
video works by artists from the extended drj programme will be shown there on a screen as wide as the room.

Comprehensive group exhibition with a focus on light art in the museum
and in the city of Celle (DE) and surroundings with a.o. works by the previous
recipients of the Deutsche Lichtkunstpreis:
Otto Piene, Mischa Kuball, Brigitte Kowanz and Jan van Munster.

Group show with works by

curated by Katrin Brand M.A
in cooperation with Hellweg Konkret and Sammlung Schroth

An exhibition of rare multiples and unique works by the artists of the gallery and from the estate of the founder Müller-emil (1934-2021).

Group show with works by artists represented in the collection.

Galerie Van den Berge celebrates the 30th anniversary of the gallery with a series of
three exhibitions with works by the artists of the gallery.

Duo presentation
During The Hague Contemporary Art Weekend, 11 until 13 September 2020

For the exhibition Air, guest curator Colin Huizing invited internationally renowned artists whose installations, objects and performances make the phenomenon of air tangible and question it. A large number of works in the exhibition allow you to experience the beauty and essence of air, but there are also works that directly or indirectly draw attention to the endangered quality of air in our atmosphere, the downside of our current prosperity. They indicate the spirit of the times in different ways, but above all draw attention to neglected details and thus make us aware of the world in which we live. The exhibition, which covers the vast majority of Kranenburgh’s new wing, unfolds like an exciting journey through the halls and allows the visitor to see, hear, feel and contemplate air.

The gallery will be open according to the current national hygiene rules. From now on the public opening hours of the gallery will be Friday and Saturday from 1 to 6 pm and by appointment. There will be no special opening, but please pass by one of these days or make an appointment for a private view. The gallery will allow a limited number of visitors at a time. However, the gallery offers enough space to keep a safe distance. 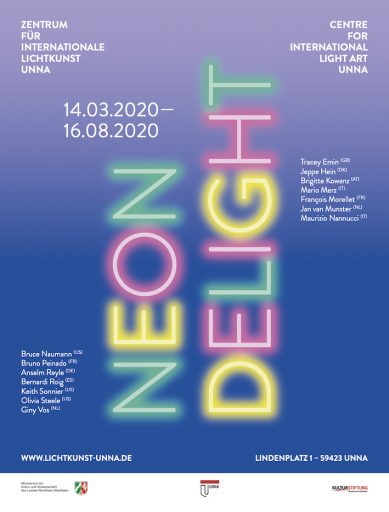 The show is still running.

The festive presentation of the German Light Art Award was on 19 January 2020 at the Kunstmuseum Celle.

Works by Van Munster will be on display in a solo exhibition through 29 March 2020.

The museum was established in 1998 as a 24-hour art museum. It houses one of the most extensive museum collections of contemporary light art in Germany.”

Galerie Ramakers celebrates its 25th anniversary.
This time no autonomous works on the wall or in the room,
but 6 murals, 1 installation and a number of specially made birthday multiples.
A spectacular transformation of the space, a combination of art and architecture. 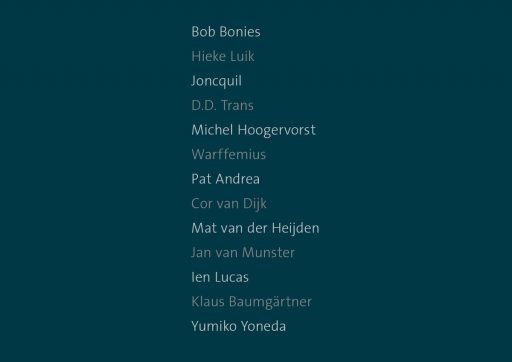 Slewe Gallery is pleased to announce the opening of the exhibition
Private View, celebrating the 25th anniversary of the gallery to be held
at Huize Frankendael in Amsterdam.
The exhibition will consist of a selection of works by the artists shown at the gallery through the years.
They are installed in the salon rooms and garden of this 18th century building.

A publication will be issued for this exhibition.

The Museum of Silence is back in the Netherlands: in De Ketelfactory, Schiedam.

For the best part of a decade, between 1992 and 2001, a mysterious Museum of Silence travelled through our country. In galleries, museums, convents and libraries, curator and artist Rob G.M. Vrakking exhibited objects that related to silence. In 1992 he used mail art to ask hundreds of national and international artists to send him an object about silence.

The response was overwhelming: he was sent sculptures, paintings, drawings, poetry and art objects. From these, Vrakking compiled his Museum of Silence. “Silence is a rare phenomenon in our culture,” he wrote in the Museum’s catalogue.

After ten years, Vrakking decided to part with the Museum of Silence. He consigned the extraordinary collection to the Karl Ernst Osthaus Museum in Hagen, by the German border. This is a museum that has devoted itself to ‘orphaned collections’. The Silence collection has since led a slumbering existence in its attic. Curator Vrakking loved it: “The Museum of Silence, leading a still life. If the key gets lost now, it’s reached its goal.” But it never came to that.

In the NRC Handelsblad of the 2nd of March 2018, Kester Freriks – writer of the book Silence, space, darkness – appeals for the Museum of Silence to be brought back to the Netherlands and for this valuable, quirky and adventurous collection to be shown here. De Ketelfactory accepted the invitation. At the initiative of director and artist Winnie Teschmacher, the Silence collection will be shown there next year. In the meantime, the collection will be complemented with new works on Silence, created by artists with whom Teschmacher has built up an artistic connection over the years. Winnie Teschmacher asked these artists the same question as Vrakking did twenty years ago: “Create a work of art about Silence.” In the autumn of 2018, the Kunsthal Rotterdam will cover the complete range of kinetic (moving) art in the exhibition Action <-> Reaction. It will feature work by the most famous kinetic artists in the world. This impressive retrospective will offer Kunsthal visitors an opportunity to experience art that appeals to all the senses. Feel, watch, smell, hear and experience the rhythms, flashes, vibrations, instabilities and force fields right up to the cosmos! The exhibition is a revival of the successful 2013 Paris exhibition ‘Dynamo’ and is realised in close collaboration with the Grand Palais in Paris.
With over ninety artworks, subdivided into twelve themes (light, movement, structure, rhythm, radiation, vibration, instability, spatiality, vortex (swirling), immateriality, force fields and cosmos), the exhibition will show an impressive retrospective of kinetic art, including its history and the various aspects and perspectives that make this art kinetic. The artists John Armleder, Pol Bury, Alexander Calder, Jan van Munster, Ann Veronica Janssens, Philippe Decrauzat, Jeppe Hein, Anish Kapoor, Zilvinas Kempinas, Frantisek Kupka, Yayoi Kusama, Julio Le Parc, Francois Morellet, Jesus Rafael Soto and many others, will all be represented by their work.

Group show with works by the artists of the gallery.

The exhibition brings visitors along a historical timeline, an impressive cinematic experience and a thematic deepening with museum and archive pieces. You can see a filmed interview with Jan van Munster about the now removed work at the exit of the atomic binoculars. Jan van Munster’s ‘Emergency Exit’ of 1975 covered the atomic escape hatch and vent tubes where the most important PTT people (= Post Telegraph Phone) could provide international communication.

In Persuit of Light

The exhibition, curated by Renate Bender, was on display at Neuer Kunstverein Aschaffenburg (DE) in March/April 2017. Within the concept Renate Bender shows other works of the same artists in her gallery in Munich (DE).

Group show with works by:

International group show at the occasion of the 35th anniversary of Foundation Konzeptuelle Kunst and the 70th birthday of founder and collector Carl-Jürgen Schroth.

Affordable art works of upcoming and leading artists in the context of Art Rotterdam.

Nyenrode Business Universiteit, founded in 1946, is the only private university in the Netherlands. It builds on the motto ‘for business, by business’. This year Nyenrode is celebrating its 70th anniversary.

PostNL, one of the founders of Nyenrode, has one of the oldest business collections in the Netherlands. The core collection comprises more than fifteen hundred works and includes paintings, photography, graphics, sculptures and applied art. The exhibition from January 23 to April 24, 2017 shows a selection of 60 works (by among others Jan van Munster) on the campus of Nyenrode.

Artissima Torino is the most important art fair in Italy.

CODA Museum Apeldoorn (NL) presents an overview of all winners of the Wilheminaring, the Dutch prize for sculpture, which is awarded every two years to an eminent Dutch sculptor. It is one of the most important art prizes in the Netherlands: Joop Beljon (1998), Joep van Lieshout (2000), Jan van Munster (2002), Carel Visser (2004), Maria Roosen (2006), John Körmeling (2009), Piet Slegers (2011), Hans van Houwelingen (2013), Auke de Vries (2015). The award consists of a specially designed ring and a commission for a sculpture in Sprengenpark, Apeldoorn (NL).

At the invitation of Samuel Vanhoegaerden Gallery, Knokke (BE) Jan van Munster shows key works from 1968 until now.

The exhibition “Floating – Between Illusion and Precision” is due to the suggestion of the Frankfurt cultural scientist Volker Fischer, who has also been the curator.

De Ketelfactory is bursting at the seams! From the 16th of April through the 17th of July 2016 the Schiedam-based exhibition space will be diverging to the Noletloodsen for art manifestation Snapshot of a larger order. Twenty artists who have previously exhibited work at De Ketelfactory are creating new work specially for this occasion.

END_OF_DOCUMENT_TOKEN_TO_BE_REPLACED

The exhibition is centered around the sense of touch and the haptic system as a possibility of aesthetic perception, and it throws up a series of questions at the same time: How do we perceive tactile art? What happens when our skin suddenly plays the main role in the experiencing of art? Even without direct physical contact with the beholder, can artworks appeal to their sense of touch? Can tactile experiences be described and translated into images? Works from entirely different eras testify to an understanding of art that includes the tactile dimension. Tactility has increasingly become a deliberately employed design element since the mid-20th century. END_OF_DOCUMENT_TOKEN_TO_BE_REPLACED

‘The exhibition in the Stedelijk Museum Schiedam is one we all eagerly await.’

With the exhibition entitled Ik hou van Holland. Nederlandse kunst na 1945 (I Love Holland. Dutch post-war art), the Stedelijk Museum Schiedam will present a comprehensive overview of post-war Dutch art. An overview of this quality, magnitude and depth has never been shown in the Netherlands. It displays the developments in Dutch contemporary art, and links these to developments in society.